Hakata Station is known as the gateway to Kyushu, Japan’s southernmost main island. It’s located in Fukuoka City, the largest metropolis on Kyushu and an important transit nexus. Rebuilt in 2011 to coincide with the completion of part of the Shinkansen bullet train network in Kyushu, Hakata Station is an enormous complex housing platforms for local and express trains as well as many shopping, dining, entertainment and information facilities. 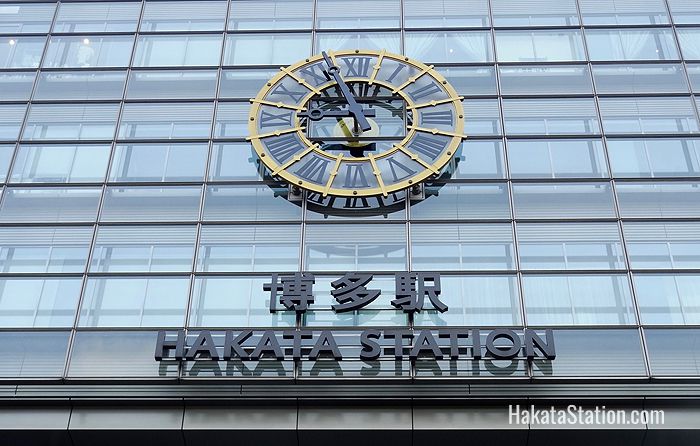 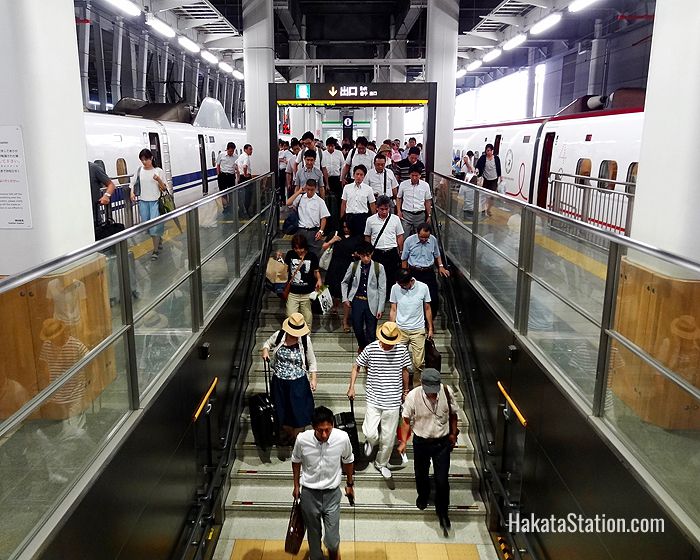 Hakata Station is housed in the JR Hakata City building, which is connected to several shopping and dining facilities. A central east-west corridor runs through the main floor of the station, connecting its west side (Hakata entrance) and its east side (Chikushi entrance). 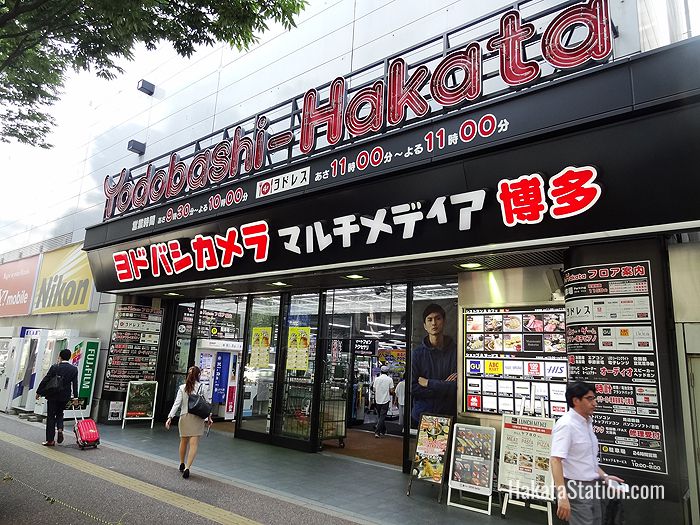 There are hotels on both sides of the station, with Hotel Nikko Fukuoka and Crowne Plaza ANA Fukuoka among those on the Hakata side. Hotel Clio Court and JR Kyushu Hotel Blossom Fukuoka and others are on the Chikushi side.

For shopping options, Hankyu Department Store, Amu Plaza mall, Tokyu Hands department store and the Kitte mall are on the Hakata side of the station. Amu Est mall, Deitos food court and Tokyo-based electronics chain Yodobashi Camera are on the Chikushi side. Ming, Hakataeki Chikagai and Hakata Ichibangai are underground malls at Hakata Station.

There are station maps and overhead signs aplenty at Hakata Station, and a large information desk in the middle of the central corridor. 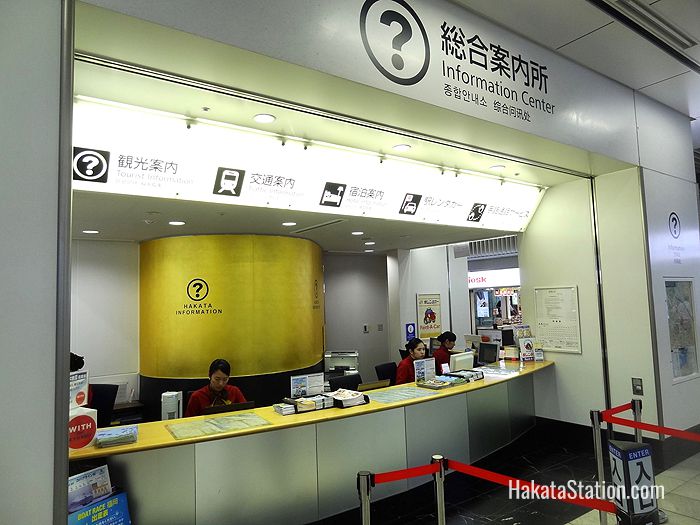 The Information Center is in the middle of Hakata Station

This well staffed center is located in the middle of the central corridor at Hakata Station. Multilingual staff can provide maps and information on sightseeing, trains and hotels, and also arrange rental cars. There’s free Wi-Fi and a currency exchange booth is behind it. Look for the “Information Center” sign with the large circled question mark. 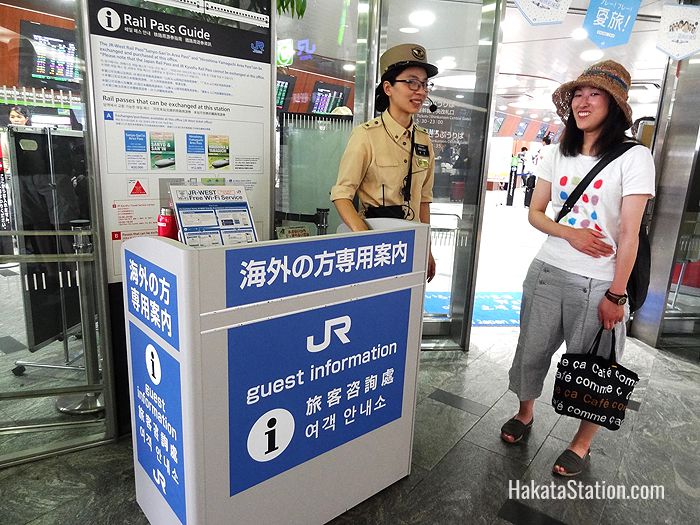 Information stand for foreign travelers by the Shinkansen Central Gate

There’s also an information stand for foreign travelers by the Shinkansen Central Gate. 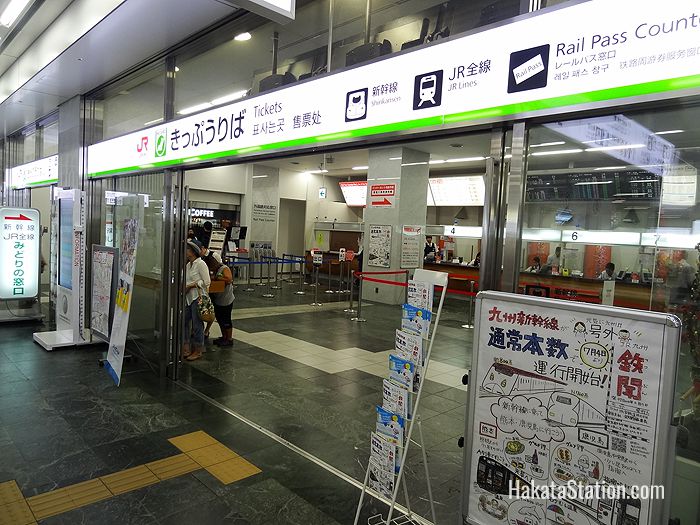 To buy tickets for Shinkansen bullet trains and other intercity services, there are three main JR Reservation Ticket Offices (aka Midori-no-Madoguchi) at Hakata Station. 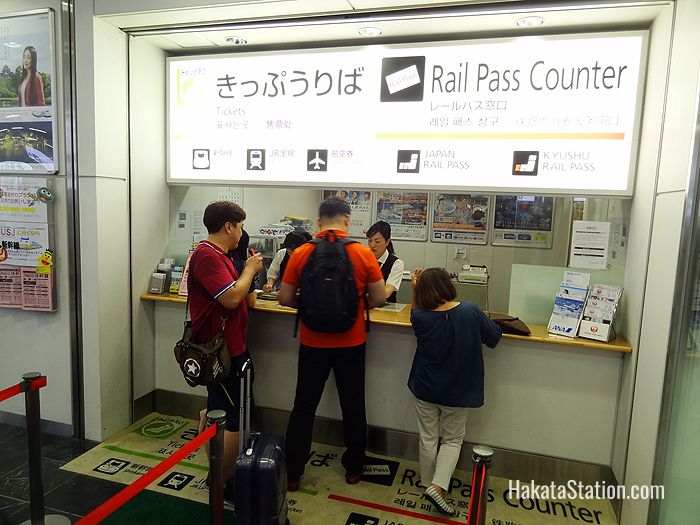 You can exchange vouchers for Japan Rail passes and Kyushu rail passes at the Central Gate JR Reservation Ticket Office just behind the Hakata Station Information Center. Look for the Rail Pass Counter sign (open: 8:30-19:30 on weekdays and Saturdays, 8:30-18:00 Sundays and holidays). 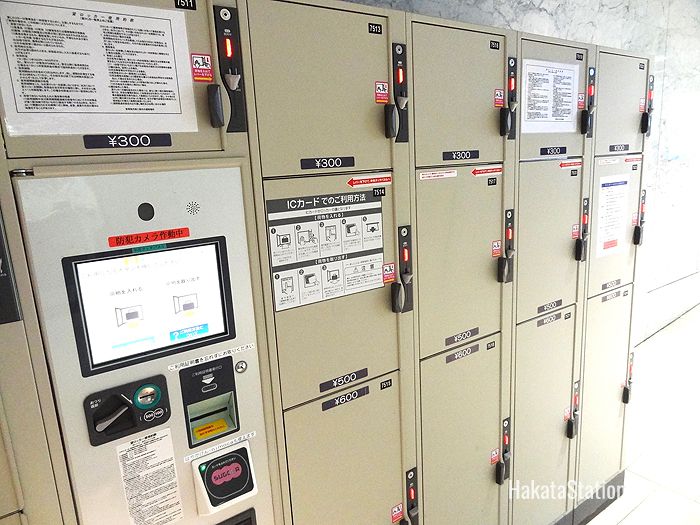 Coin lockers can be found throughout Hakata Station

If you want to store your luggage while exploring or shopping, coin lockers at Hakata Station can be found in numerous locations, particularly on the north side of the central corridor.

There’s a lost and found office near the Chikushi or east side of the station. 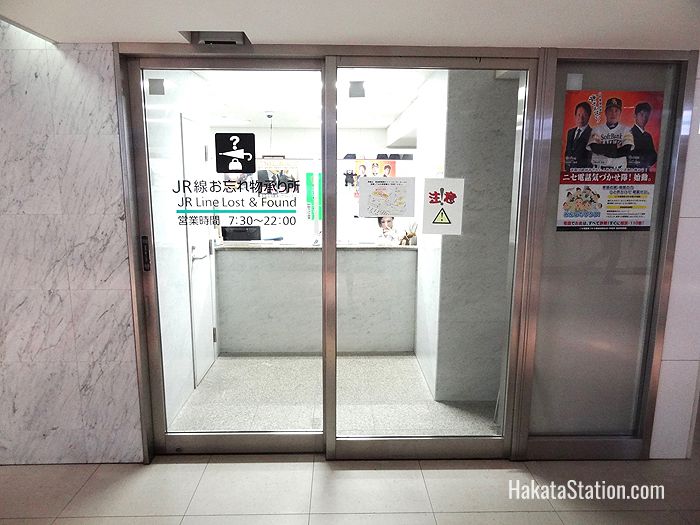 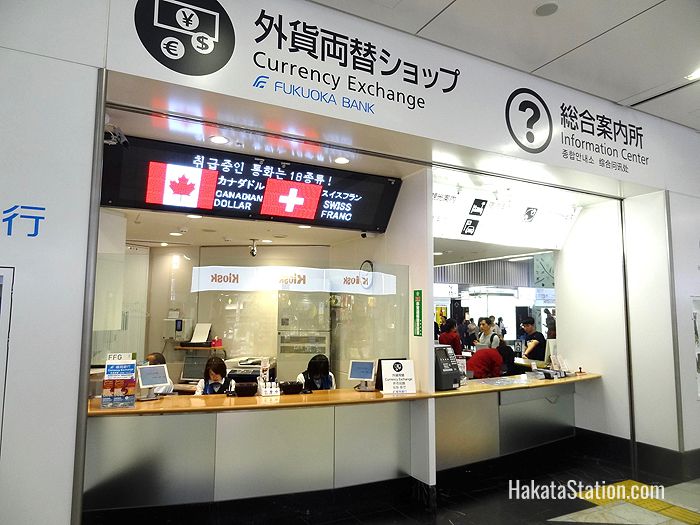 A currency exchange booth can be found at the Information Center

Fukuoka Bank: This moneychanger is right by the Information Center in the middle of the station’s main corridor (open: 8:00 – 21:00). There’s also a money exchange machine around the corner. 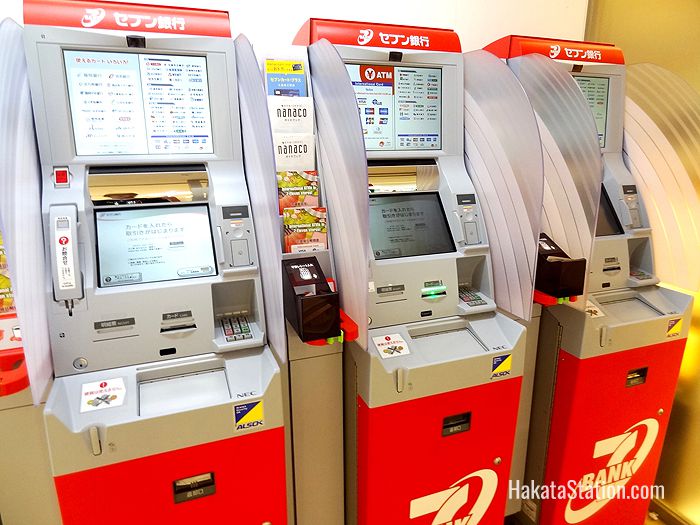 There are many ATMs in and around Hakata Station but travelers should remember that most ATMs in Japan do not accept credit, debit and cash cards issued outside Japan. You can, however, use such cards at ATMs in Japan Post offices, 7-Eleven convenience stores and SMBC Trust Bank branches, which are also under the Prestia brand. ATM locations at Hakata Station that take overseas cards include:

Japan Post ATM: First basement of the entrance to the subway by the Chikushi or east entrance to Hakata Station.

SMBC Trust Bank Fukuoka Branch: This bank is located on the west side of Hakata Station. It’s right across the street from the Hakata Bus Terminal, which is off the northern side of the station plaza.

7-Eleven Hakata Eki Chikushi Guchi Branch: This convenience store is located on the east side of Hakata Station, slightly south of the Chikushi entrance. 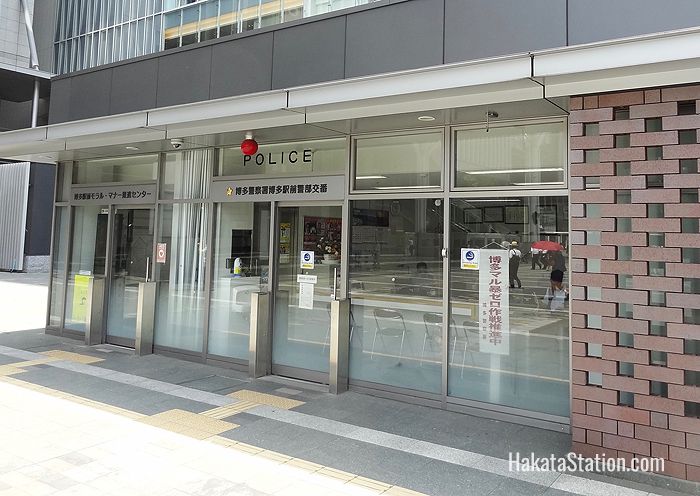 There are police boxes (koban) outside Hakata Station on both the east and west sides. Officers can help with simple directions. 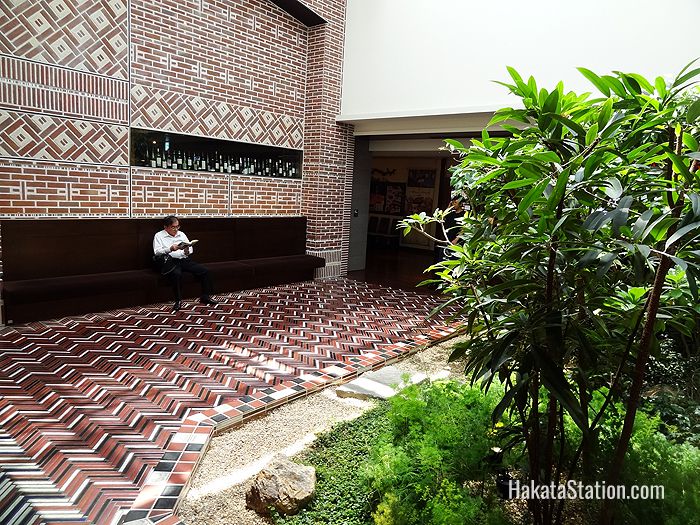 A leafy space in the Kooten food court

Kooten food court on the 9th and 10th floors of the JR Hakata City building has over 40 restaurants as well as atriums with natural light, plants and benches to relax. 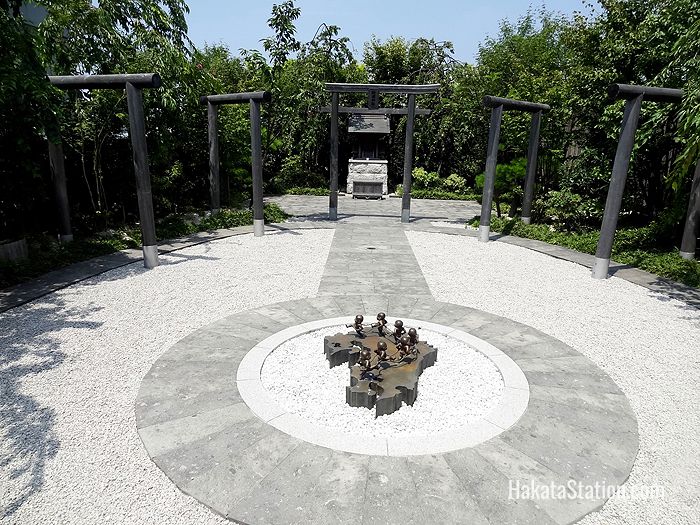 Tsubame no Mori Hiroba plaza on the roof of the JR Hakata City building is the place to go to unwind, get some fresh air and take in some sweeping views of Fukuoka – but it can be very hot in summer. This unusual feature for a railway station in Japan has several attractions: